Bitcoin shows slight recovery – These are the reasons behind the correction 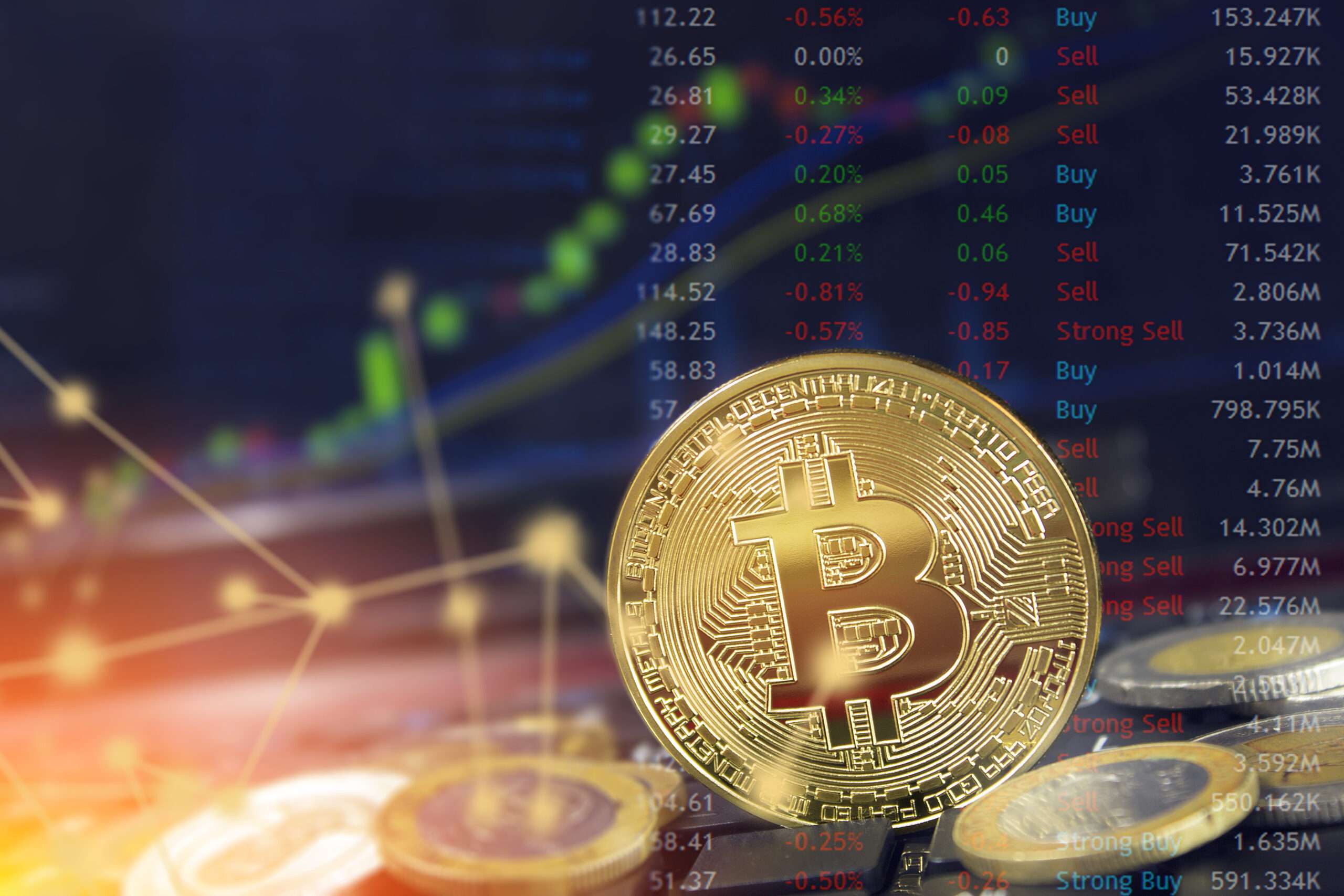 Bitcoin is currently recovering after a painful market correction, with the price of the largest cryptocurrencies remaining in the red. At the time of publication, Bitcoin was trading at $48,762, with a loss of 7.5% in the last 24 hours and a still strong gain of 53.4% in the last 30 days.

Analyst firm Santiment has published a report on the market correction. It claims that there was an increase in BTC inflow to the exchanges before the massive price drop. One hour after Santiment recorded the inflows, BTC’s price dropped by 16%. 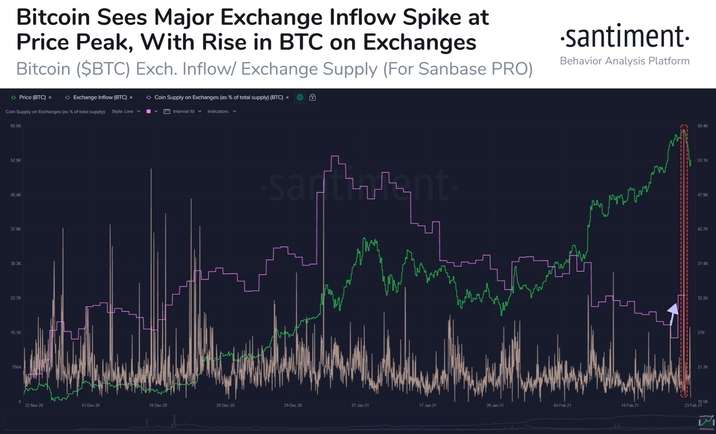 Among the inflows to exchange, one whale stood out from the crowd. As Santiment reported, the “second largest” Bitcoin transaction of the year took place with an estimated 2,700 BTC. This whale also made a transaction in March 2020, just before the massive sell-off that will go down in Bitcoin history books as “Black Thursday”. While the analytics firm doesn’t think this whale caused the correction on its own, it was “a decisive factor.”

As we noted yesterday, there was an 11x exchange inflow spike that initiated #Bitcoin‘s price correction from its $58.3k #ATH. Further data combing revealed that an address was responsible for the 2nd largest $BTC transaction of the year, an import of 2,700 tokens to the wallet pic.twitter.com/CTgtJr27np

IntoTheBlock also recorded an increase in BTC inflows to exchanges. Most of the funds appeared to have been directed to Gemini which received about 33,870 BTC. Based on its IOMAP indicator which clusters Bitcoin inflows and outflows, the firm has set a strong support level at $48,000 due to a “wall” created by 777,900 addresses. Should this support not hold, IntoTheBlock is recording another major support level between $45,000 and $46,000 with 532,000 addresses.

Its time to pay attention to supports. Inflows to whale wallets at $48500 and $46500 should provide BTC with some support. $55400 is an important level to keep an eye on as well. Getting back above it will be a good sign,. pic.twitter.com/eW7uznqoOf

A report from Glassnode predicts a new consolidation phase for Bitcoin with support at $48,000. The research firm noted an increase in whale activity over the last year. Addresses with funds between 1,000 to 10,000 BTC have risen by 14.18% from March 2020 to February 2021.

However, in the last two weeks, these addresses have shown a reduction in their funds or rather, a restructuring that Glassnode does not necessarily attribute to a massive sell-off. On the contrary, they note that many large transactions could be going to cold wallets.

So whilst coins are on the move and larger balances are being reclassified, it does not necessarily suggest an end to whale spawning season (and may in fact suggest the opposite!). 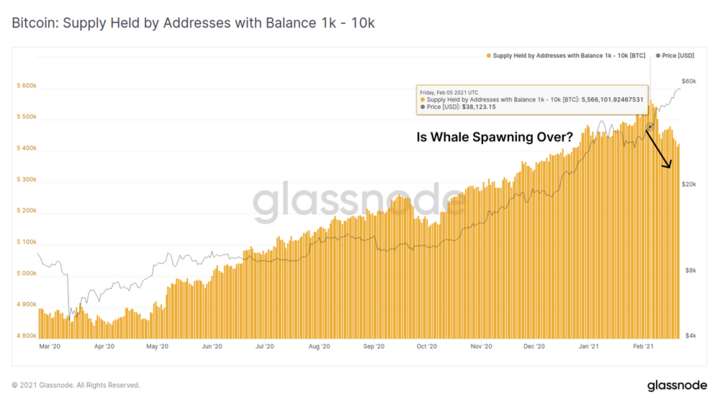 From Glassnode’s findings, it is possible to infer that in the long term the accumulation pattern will continue. The stock performance of institutions that have invested in Bitcoin is extremely positive. MicroStrategy is up 614%, Tesla is up 70% since they bought BTC. With declining volatility for Bitcoin, predictions point to greater institutional adoption of the cryptocurrency in 2021. Therefore, the outlook remains bullish for the long term.

BIS and SWIFT Intensify Race With Crypto For Cross-Border Payments

Major players of the traditional financial industry are looking for new ways how to keep their positions, threatened by the emerging cryptoasset and decentralized...
Read more
Crypto News

The head of the Reserve Bank of India (RBI), the subcontinent’s central bank, has again indicated that the government might seek to enact a...
Read more
Crypto News

Source: Wit Olszweski - Shutterstock The court has approved a schedule for the Ripple vs. SEC lawsuit.  The confirmation hearing date for...
Read more
- Advertisment -

Bitcoin Rallies As Tether FUD Clears and Square Reveals $170 M Purchase, But BTC Downtrend Not Over

BIS and SWIFT Intensify Race With Crypto For Cross-Border Payments

US Treasury Secretary Has Several Concerns About Bitcoin, Addresses Need for Digital Dollar